As I noted in the previous post, on the 14th day of my trip I was very fatigued from the previous day’s speech and bear encounter. And I cut short a hike at Kinzua Bridge State Park because of my lack of energy. So the day’s hiking, aside from Kinzua Bridge,  consisted of walks in Bradford and Smethport, and I’ve taken the opportunity to combine the two into a single post even though they bookended the bridge hike. It made for a long day, nearly as long as that last sentence.

Bradford is an old oil and mineral town, and seat of McKean County. I’ve joked about the city being known for the Zippo lighter and mezzo-soprano Marilyn Horne, but it has a downtown with exploring. I’ve twice walked in downtown Bradford, first in my 2010 tour of Westsylvania and during my recent trip. I suggest starting at McDonald’s, and not for the food unless you like eating there. The downtown McDonald’s has a working oil well in its drive through. This well has yielded continuously since 1870.

Moving on to more conventional buildings, the downtown has a lot of brick structures built when the idea of the skyscraper was new and “form ever follows function” was just the words architect Louis Sullivan was searching for. Sullivan, designer of the first skyscraper,  used the phrase in his 1896 essay “The Tall Office Building Artistically Considered”. Turn of the century architecture is fascinating to me, and mid-sized cities such as Bradford often have wonderful examples standing. For instance, Bradford has its answer to New York’s Flatiron Building. In this case form not only followed function, it had to fit the space available. Some people might think this building odd or funny, but I see creativity where others see humor. 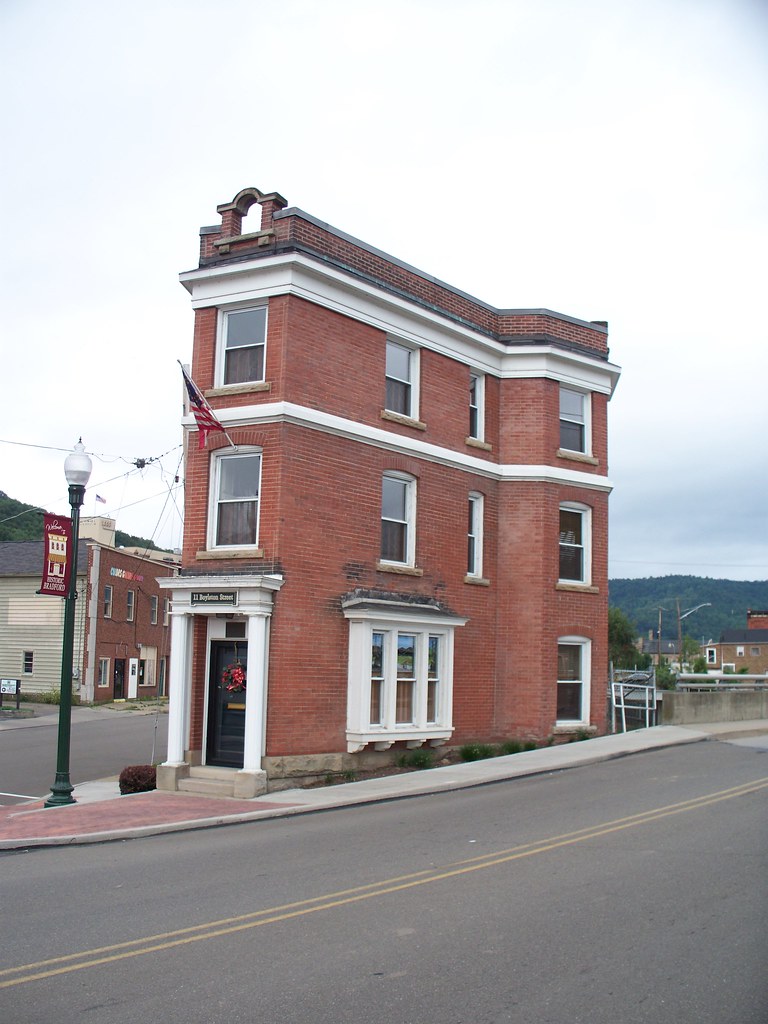 Smethport is only 30 miles from Bradford, and small enough most people driving on Route 6 will miss it if the stoplight is green. I would have been one of those people, but I was exhausted and sought out a motel room on the edge of town. I got out of the car, into my room, and napped a couple of hours.

I woke at 6:30 and went out for a walk. Smethport is an old lumber town, and more importantly an old lumber MONEY town. Smethport has a tour of historic homes held a couple of days a month, and I regret not being able to take it. Its also a county seat, and the courthouse is as grand as any I’ve seen, and dominated the hillside downtown. More interestingly for me is the enormous park surrounding Hamlin Lake; although the ground was soft and wet in spots, my hike into Smethport via the park was fun. And in the fading light the little town in the hills looked beautiful.

I walked two miles between the time I spent in Bradford’s downtown and my stroll in Smethport. Combined with Kinzua Bridge and my fatigue this was a full day. I went to bed and slept deeply, my body preparing for the long drive home tomorrow.