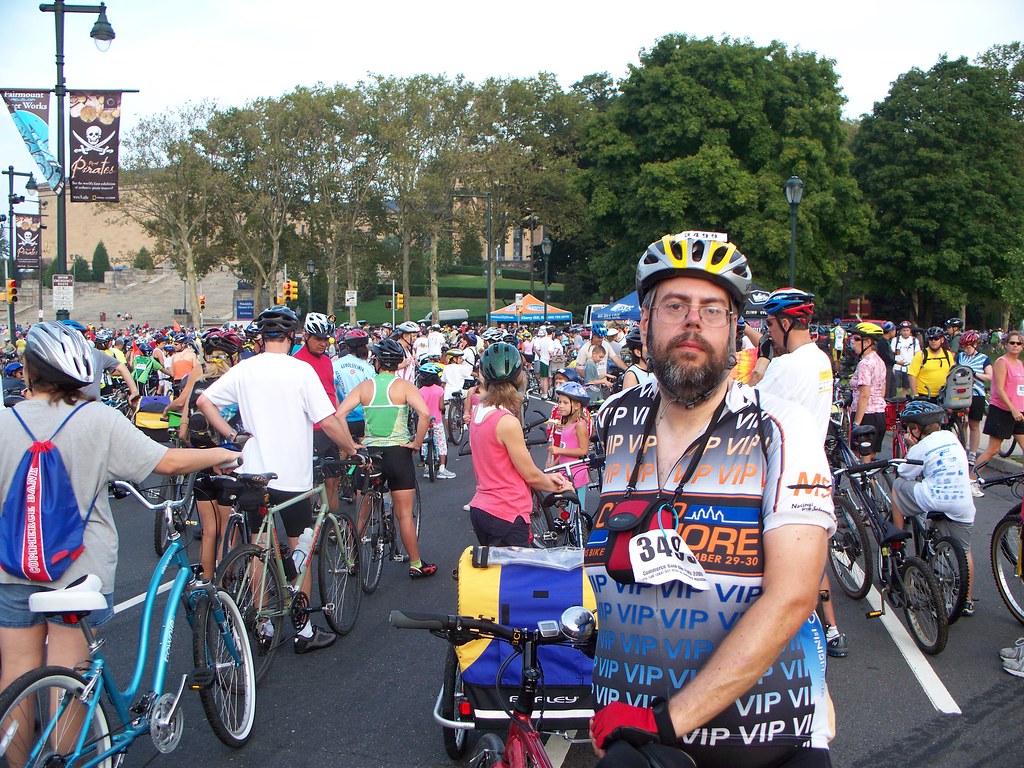 (Bike Philly was an annual event in which city streets were closed to motorized vehicles aside from police and emergency services. The event was cancelled in 2012 because of costs and the difficulty of organizing and coordinating an event that shut down the heart of America’s sixth largest city. I participated in the event in 2007, and wrote this report for my old blog. Aside from some editing, I’ve left it as it was first published.)

The  morning was clear and warm. I decided to drive for the hostel I was staying at to the start of Bike Philly, instead of riding as I wished, because of time – I hadn’t brought lights, sunrise wasn’t until 6:45 AM, I needed to pick up my rider information, and I didn’t know how strict the Bicycle Coalition of Greater Philadelphia, the event organizer, was about enforcing their 7:45 AM deadline for appearing at the ride. So I punted and drove to the parking lot at Lloyd Hall, about a half mile from the ride start at Eakins Oval in front of the Art Museum. The streetlights were strong enough I could ride to the start. 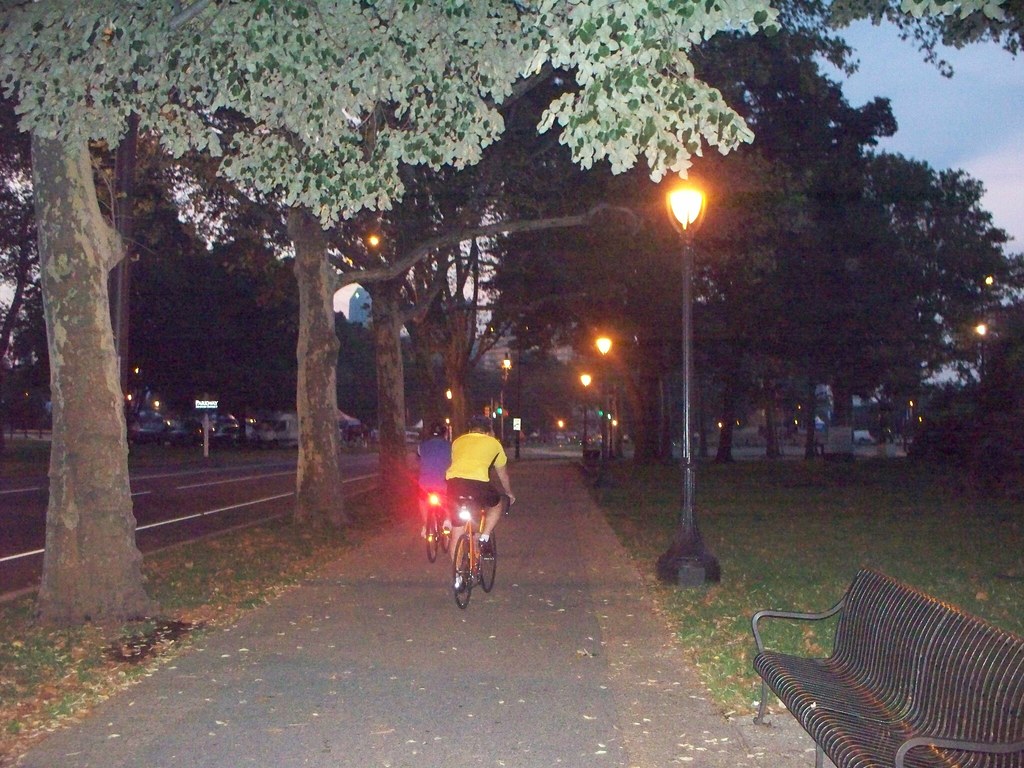 When I arrived at the Art Museum, the sun was rising over the City of Brotherly Love, and the BCGP was hard at work setting up. 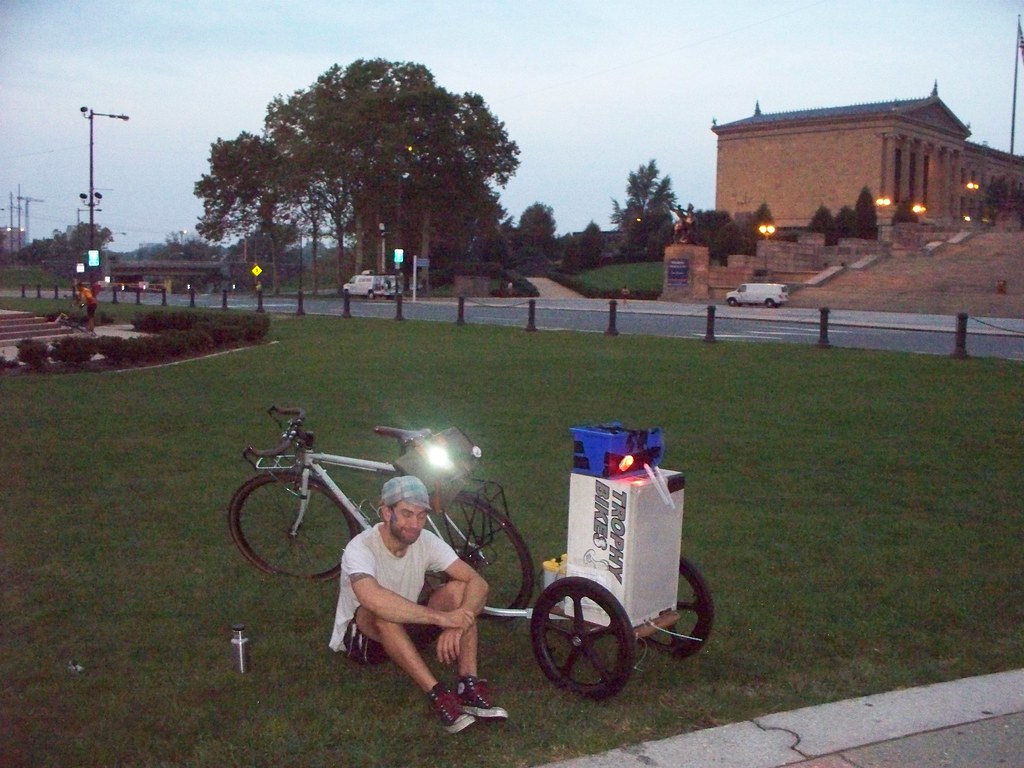 I got my rider number, and joined the mass of cyclists on the oval in front of the Art Museum. Eight AM came. After speeches and last minute instructions, the PA system played the theme from “Rocky” and 3000 cyclists began a car-free journey through seven miles of downtown Philadelphia. 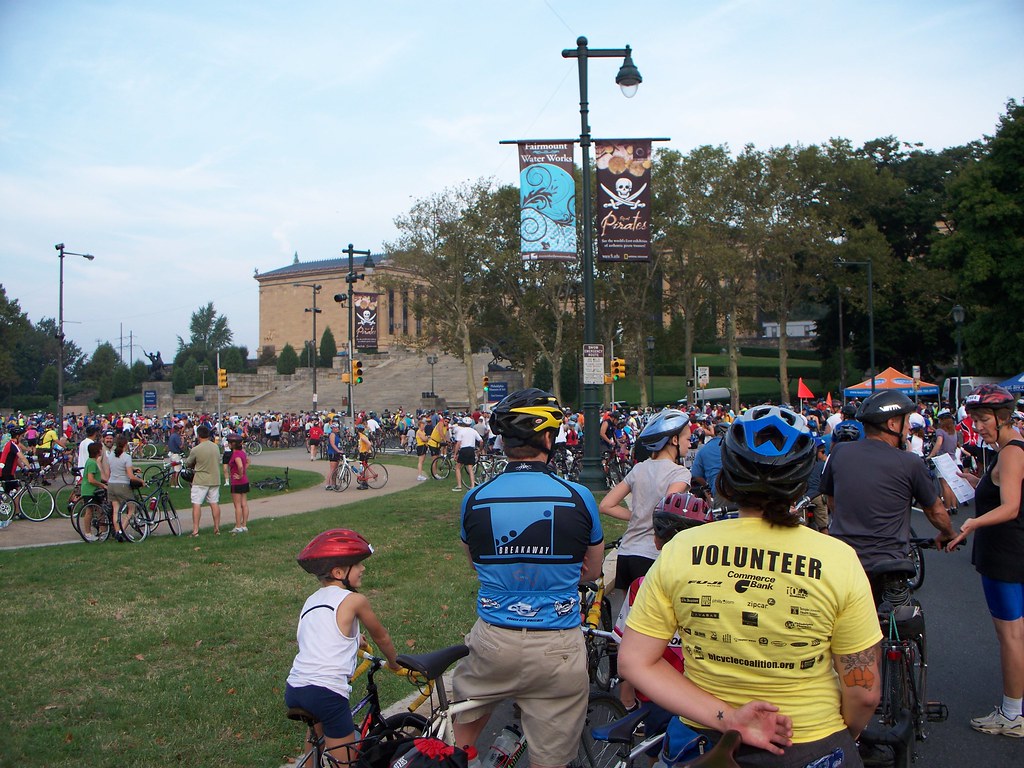 After the seven miles of the downtown, car free…. 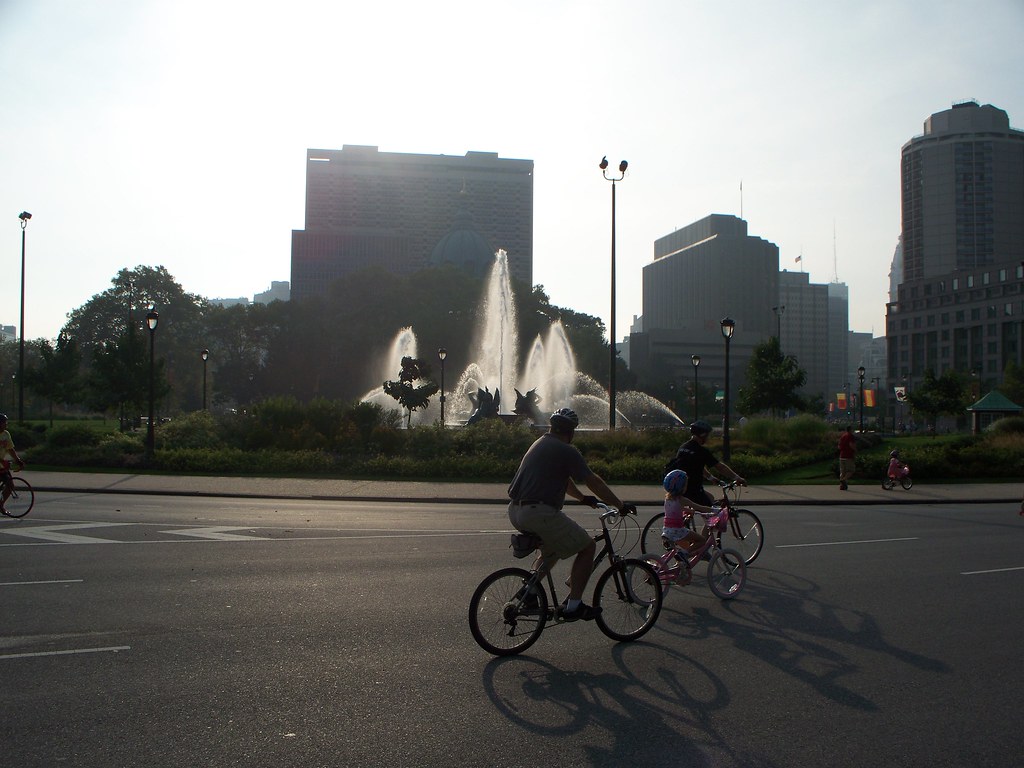 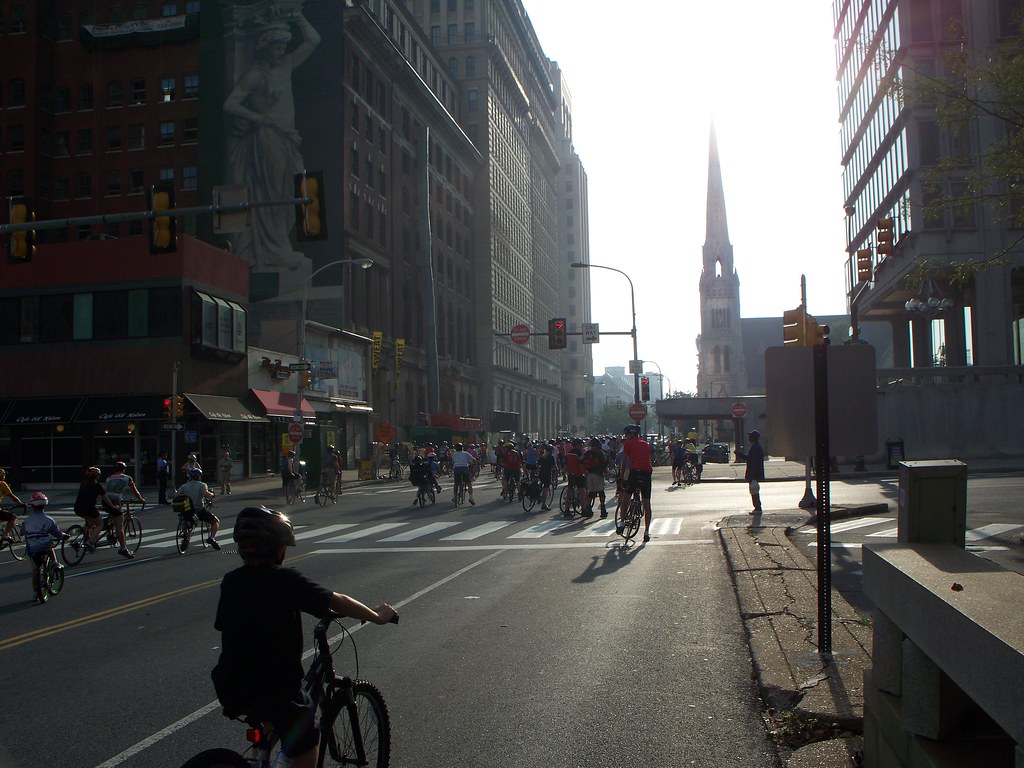 …riders were directed onto the West River Drive, and the routes divided into a ten mile and a 20/35/5o mile group. I chose the latter, but rode only 20 miles. 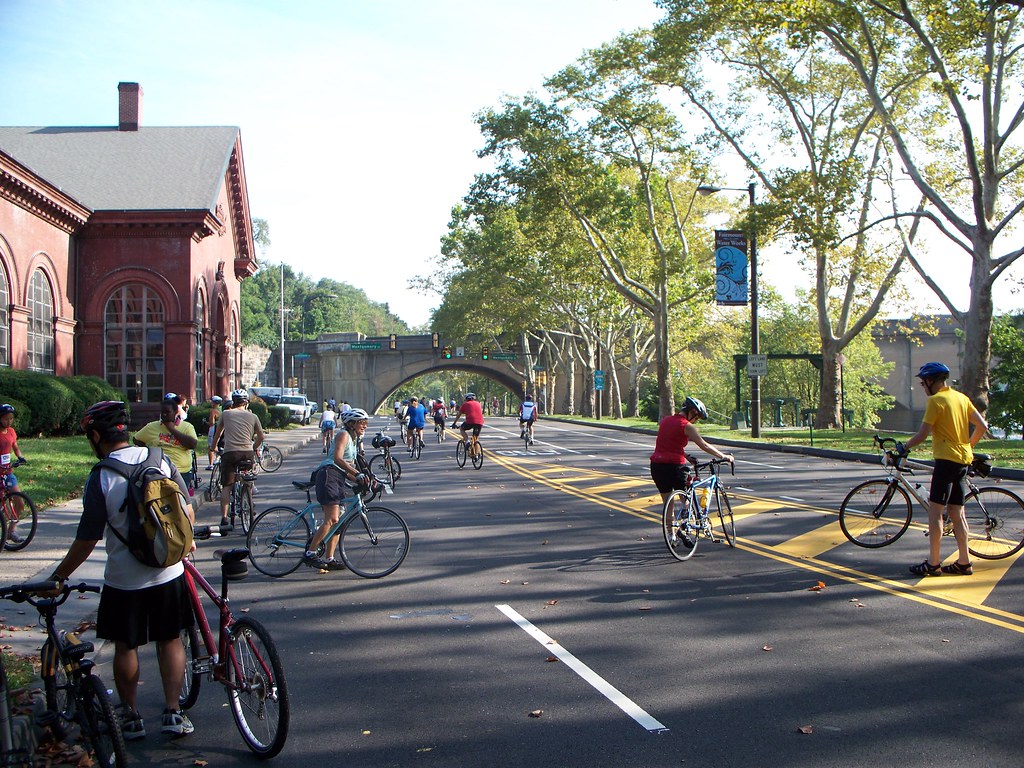 After hanging out for an hour at what was a festival of people on two wheels, I pedaled back to my car, and drove home full of thoughts about my cycling and the nature of events such as Bike Philly.

To get the personal out of the way, I got through both rides this weekend without a clipless fall. That said, I had problems using the pedals. I have a hard time getting in on the right. And I had a hard time convincing myself I really need to go clipless. The only benefit I discovered this weekend was that on a hard climb I might have some slight advantage being clipped in, but even that might be simply a matter of being forced to finish the climb because I wouldn’t be able to clip out safely. I suppose being forced to exert myself beyond the so-called comfort zone is a benefit, but that’s not what clipless is being sold, and oversold, for. There’s a lot to be said for being able to put a foot down anywhere, anytime, for any reason. Still, I don’t want to dismiss it without more testing, so I’m clipped for now.

Cadence’s refitting of my bike held up very well. On the hilly ride on Saturday, I had some back pain, but not in the usual place. Previously I had pain in the upper right shoulder and back. Now it’s on the left side of my back and ribs, and milder than before. Raising the saddle brought me into a more ‘stretched’ posture, and the soreness I’m feeling on the left is probably my ‘shorter’ side being stretched out. This is all to the good, and I expect as I get used to the fit, it will go away.

I was disappointed with my hill-climbing. A summer of flat riding, as well as six weeks off with a broken rib, has hurt what little conditioning I had. I think I’ll be OK on the MS City to Shore in two weeks, for that’s a flat ride.

Speaking of hurt, my hunt for a new saddle begins tomorrow. My gel saddle has over three thousand miles on it, and it hasn’t worn well.

My thoughts about Bike Philly are mixed. It was a wonderful event, wonderfully run. However, what sort of message does an event that shuts down city streets for cyclists send? I’ve ridden in Philadelphia. It’s a very bike friendly city. While it’s nice not to have auto traffic to deal with, I’ve ridden in traffic with some success. Bikes belong on the roads all the time, not just when the dangerous cars are gone. Every day is Bike Philly if you want it to be.

I rode with a family down the Ben Franklin Parkway. The mother was marveling at the flags lining the road. “I never get to see these.” The unspoken part of the sentence was “…with the cars around.” Curiously enough, I’ve ridden the same road back in November and December, and I’ve seen those same flags. The road wasn’t blocked off for me.

In fact, I felt more comfortable dealing with auto traffic than I did at times on Bike Philly. Cars are often more predictable than novice or ‘Sunday cyclists’. The last stretch of West River Drive was very awkward, as I had to dodge kids weaving all over the road. In Fairmount Park I was stopped at the side of the road drinking, and someone walked his bike into my rear wheel. “Sorry”,he said, “I wasn’t looking.” He wasn’t looking later, as I passed him and his kid as they weaved back and forth across the lane. He did turn as I shouted “on your right” to him – I don’t normally pass on the right, but I had to get through where I could. I’d not have that problem with drivers. On the whole, I’m more comfortable with them, if only because cars are more predictable.